April  28, 2001.  Hilton had a guest appearance at Meriden, CT's Daffodil Festival (an annual event that draws thousands of people from all around CT and neighbouring states) with his friends The Manchurians.  A man came up to him and said "Hey, I know you!  You recorded my song Don't Let Me Be Misunderstood."  That man was Horace Ott.   He proceeded to tell the story of how that song came about.  "We (pointing to his wife - who's maiden name was Gloria Caldwell) had a bit of a falling out.  She was my girlfriend at the time.  I was feeling low and this tune came into my head (he hums a few notes and sings " I'm just a soul who's intentions are good..... oh lord please don't let me be misunderstood").  I brought it to my writing partners who helped me finish the song."  Looking at the credits, one will notice that the name Ott appears nowhere.  "I used her name because I was signed to B.M.I. at the time and my writing partners were signed to  A.S.C.A.P.  Back then a B.M.I memeber couldn't co-write with a member from A.S.C.A.P.  After that I had a saying 'Just call me Gloria' " he says laughing. 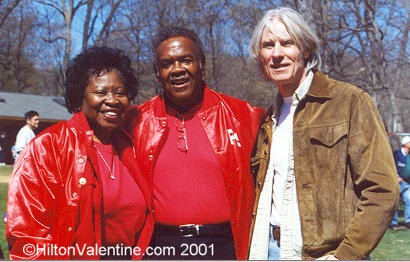